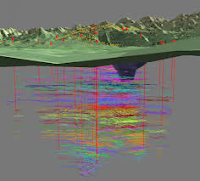 Many West Virginia landowners own the surface rights of their property, but not the mineral rights.

In recent years there has been a boom in drilling for natural gas in some sections of the state, increasing the importance of mineral rights.

When landowners don’t own the mineral rights, do they have any protection against an energy company sending workers and machinery onto their property without permission to drill wells that are intended to access the gas under adjacent properties?

That question was the focus of a case decided recently by the West Virginia Supreme Court of Appeals.

In a landmark decision, the court affirmed that using one property’s surface area, without permission, to access minerals under neighboring properties qualifies as trespass.

In earlier times when shallow wells were drilled around the state, the surface owner who did not own the minerals generally was given free gas and often a portion of the royalties. The energy company was cooperative about well site location and intrusion on the land, especially on farms. But current deeper drilling operations are much more complex, and the companies have not sought out the cooperation of the surface owners. Free gas is gone too.

Current West Virginia law permits an energy company to occupy the surface to extract minerals under that specific property even though the surface rights’ owner has not given permission.

The new technique of deeper drilling combined with underground shale hydrofracturing (known as fracking) has been used to reach greater distances horizontally and extract more gas from each well. In West Virginia, Doddridge County has become a center of extensive gas extraction.

When EQT, Inc., based in Pittsburgh, began drilling operations on the properties of two Doddridge County surface owners in 2013 as a way to reach the gas under adjacent properties, EQT did not have their permission to use their land and had been warned by the landowners’ attorney not to engage in drilling.

There was a 1901 shallow well lease still in effect for the properties which EQT used for their right of entry for the gas under their land, but the landowners disputed that the old lease gave EQT a right to drill using fracking methods to reach underground to access surrounding properties’ gas.

Over 16 months, EQT used 20 acres for the well area and the drilling and operation of nine wells.

The surface owners sued in 2014. A jury trial resulted in $190,000 in damages for the landowners from the company’s trespass in order to access other properties’ gas and resulting property losses.

EQT appealed the decision to the state Supreme Court, and the court’s recent decision upheld the rights of surface owners to block the use of their surface area when the company wants to reach adjacent lands’ minerals.

As the landowners’ attorney, Dave McMahon, said, “...we won and we won big time!”

Numerous landowners around the state do not want the extraction or well operation on their property because of the potential for environmental harm and have organized to oppose fracking.

This case is ground-breaking, and there will be ongoing financial and operational ramifications for both gas companies and landowners in the Mountain State.