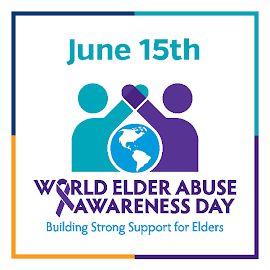 June 15th is World Elder Abuse Awareness Day. June is also PRIDE Month. As we take this time to recognize all elders that have been and are currently experiencing abuse, let us also recognize specifically LGBTQ+ elders that have experienced physical, sexual, mental, emotional, financial, and other types of abuse.

In a study done in 2001 by D’Augelli & Grossman, 416 LGB elders (transgender elders were not included in the study) age 60 or older, it was found that 65% of those elders had experienced some type of abuse because of their sexual orientation. In another survey done in 2009, 3,500 LGBT elders (55 or older), 8.3% of them reported to be abused or neglected by a caretaker because they were an LGBT individual and 8.9% were blackmailed or financially exploited. (Frazer, 2009)

Mistreatment and discrimination of LGBT elders happens in long-term care facilities, too. Facility staff might refuse to accept LGBT resident’s power of attorney, deny visitors, psychologically abuse a resident, or even a failure to provide proper medical care. A study published in 2011 by National Senior Citizens Law Center with the collaboration of others, reported LGBT individuals, or someone they knew, was denied medical treatment because of their perceived sexual identity. 46% reported that they or a loved one was not comfortable self-identifying with medical staff. This has resulted in LGBTQ+ elders being “recloseted” because of fears they have for their health and safety as an LGBTQ+ individual in a long-term care facility. Those who are residing in long-term care facilities have the same rights to be free from discrimination as people living in the community.

There are numerous reasons why LGBTQ+ seniors may struggle to seek help after abuse. Many LGBTQ elders grew up in a homophobic environment, so they can be prone to hide their sexuality or gender identity. There are some people who experience guilt and shame and legal discrimination. An example of legal discrimination would be discouraging elder LGBTQ+ victims from getting out of abusive relationships because they have little to no legal rights to the money and assets between them and their partner.

West Virginia is not the exception. We are included in the numbers. Everyday seniors in West Virginia are experiencing physical, sexual, mental, financial, and emotional abuse. We at WV Senior Legal Aid are here to help seniors prevent and remedy abuse in West Virginia. If you are 60 years or older and a resident of WV, call us at 1.800.229.5068 to talk to an attorney for free.
contributed by Katie McCausley, Public Interest Law Fellow at WVSLA
Posted by Katie McCausley at 10:02 AM